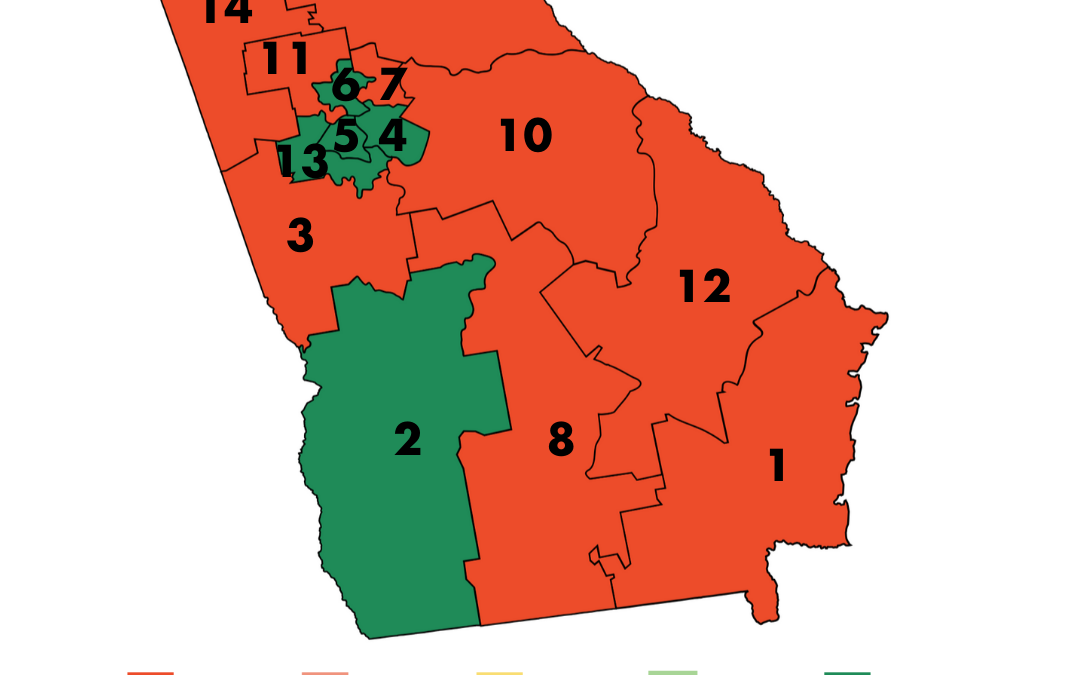 Atlanta, Georgia — Georgia Conservation Voters today released the Georgia delegation’s scores on the League of Conservation Voters’ 2019 National Environmental Scorecard. The Scorecard is the primary yardstick for evaluating the environmental records of every member of Congress, and is available for download here, in Spanish here, and online at https://gcvoters.org/federal/.

“As the Trump administration continues to roll back environmental protections and actively put our health at risk, Senators Isakson and Perdue, as well as Republican members of Georgia’s Congressional Representatives, refused to stand up for Georgia’s air, water, land and wildlife,” said Georgia Conservation Voters’s Executive Director Brionté McCorkle. “Instead of rubber stamping Trump and Mitch McConnell’s polluter agenda, we need our representatives in Congress to fight for Georgia’s communities — and thankfully we can count on Representatives Bishop, Johnson, Lewis, McBath and Scott to push back. Georgian’s from all backgrounds are ranking the environment as a higher priority. We’re more determined than ever before to hold members of Congress accountable for denying our families’ fundamental rights to clean air, safe drinking water and a healthy environment.”

The 2019 Scorecard measures votes cast during the first session of the 116th Congress. In Georgia, 5 House members earned a score of 90 percent or greater, while 9 House members and Senator Perdue earned an abysmal score of 20 percent or less. The average House score for Georgia was 39 percent and the average Senate score was 21 percent. The full delegation’s scores for 2019 are:

“We are grateful to Speaker Pelosi and her pro-environment majority for prioritizing climate action and protections of our air, water, lands, wildlife, and democracy,” said LCV Senior Vice President of Government Affairs Tiernan Sittenfeld. “While pro-environment leaders supported policies that will protect communities across the country, especially low-income communities and communities of color, from the negative impacts of climate change-fueled extreme heat, natural disasters, and toxic pollution last year, Senate Majority Leader McConnell’s refusal to act on hundreds of important House-passed bills put the health of our children and families at risk for the benefit of his corporate polluter friends.”

“When Congress fails to protect our fundamental rights to clean air and safe drinking water, our communities are the ones most impacted,” said National Director of LCV’s Chispa program, Johana Vicente. “We are incredibly thankful for the environmental champions in both chambers of Congress who stood up and fought for us in 2019. We will not forget the senators who voted against the health of our families when they sided with Trump and polluters time and again.”

The 2019 Scorecard includes 35 House votes that span the chamber’s assaults on clean air and water, lands and wildlife protections, investments in clean energy and so much more. In the Senate, the majority of the 14 votes scored are confirmation votes on Trump’s anti-environmental nominees.

LCV has published a National Environmental Scorecard every Congress since 1970. The Scorecard represents the consensus of experts from about 20 respected environmental and conservation organizations who selected the key votes on which members of Congress should be scored. LCV scores votes on the most important issues of the year, including energy, climate change, public health, public lands and wildlife conservation, and spending for environmental programs. The votes included in the Scorecard presented members of Congress with a real choice and help distinguish which legislators are working for environmental protection. More information on individual votes and the Scorecard archive can be found at scorecard.lcv.org.