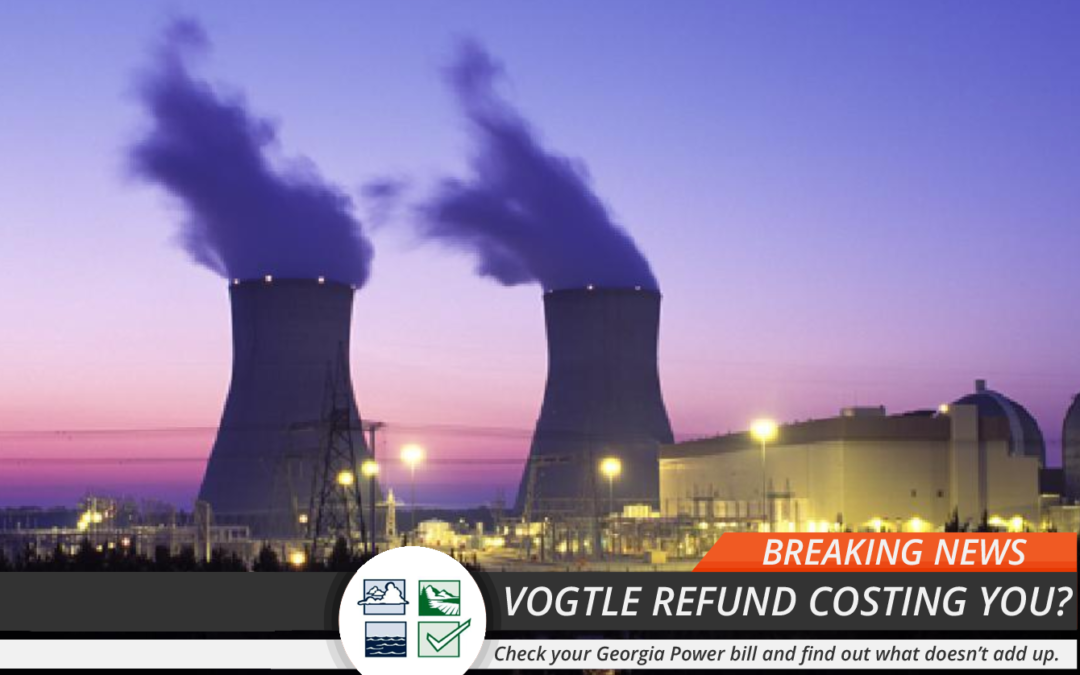 Did you notice your April bill seemed lower than usual? You probably paid it and kept it moving. Maybe you assumed you used less electricity and you patted yourself on the back for being such a good friend to the environment. Maybe you thanked the good fellas down at the Public Service Commission for protecting you, as a ratepayer, by requiring Georgia Power to issue these refunds.

If you’re like most Georgians, you haven’t heard much about Plant Vogtle, or that the original cost projections have now doubled from $14 billion to over $25 billion, making it the most expensive electricity ever, if it is finished. Unless the regulators have a huge change of heart about whether ratepayers or shareholders should shoulder this boondoggle – or we force them to – you’re likely going to pay a lot more.

To try to cover up how deep in the hole this project is, you will get two more “refunds,” this year for a total of $75. At the end of the day, this $75 “refund” will cost you $389. It’s not unlike a payday loan from a predatory lender, except that you had no choice in the matter.

In December, when the Public Service Commission voted to move forward with Plant Vogtle (in spite of their staff analysis which showed the project as no longer economic), As a result of Westinghouse bankruptcy, the parent company, Toshiba, had to pay the Vogtle owners $3.68 billion for breaking the contract. Georgia Public Service Commissioners required Georgia Power issue $189 million of their portion as three $25 “refunds” to customers in 2018. The rest of the Toshiba payment will be used to pay down the construction costs for Vogtle. But every dollar that does not pay down the construction cost, Georgia Power gets to recover for the next 60 years, which is how your $75 “refund” today becomes $389 you pay over the long haul. 1

To add insult to injury, Georgia Power’s profits currently stand at $12 billion total, $5 billion of which is due to the five years of delay.

The Public Service Commission is playing a classic game of: Heads, Georgia Power wins, tails, customers lose with these “refunds.” Don’t fall for their gimmicks!

1. The financing is much more complicated, but to get in the ballpark, we’ll take Georgia Power’s average weighted cost of capital (7.8%) and account for the taxes (1.8%) for a total of 9.5% depreciated and financed over 60 years. Seventy-five dollars financed at 9.5% over 65 years is going to cost you $389 in interest. During the hearing on May 2, Chair Bubba McDonald granted the Southern Environmental Law Center’s hearing request on this issue, so there will be a more accurate number later this summer.